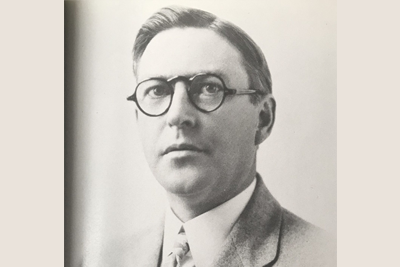 SDRI is Dedicated to Carrying on Founder’s Legacy

Sansum Diabetes Research Institute (SDRI) marks a milestone this month, the 100th anniversary of our founder, Dr. William Sansum’s arrival in Santa Barbara, California, the place where he would make American medical history and commit to improving the lives of people living with diabetes.

100 years ago, on November 8, 1920, diabetes specialist Dr. William Sansum arrived in Santa Barbara by train with his wife, Mabel, and their 6-year old son, Donald.

“I will never forget seeing my first palm trees, roses and geraniums blooming on all sides, a cloudless blue sky over the mountain range behind the city,” Dr. Sansum recalled. “All that and the Pacific Ocean. You have no idea the visual impact all this beauty had on newcomers from Chicago. We became instant Barbareños!”

And so, began the most significant chapter in the story of a medical trailblazer who dedicated his life’s work to the benefit of mankind.

The following day, Dr. Sansum was introduced as the new Director of the Potter Metabolic Clinic at Santa Barbara Cottage Hospital, where he told his new staff, “The outlook for medical research is brighter than at any time in history.”

18 months later, Dr. Sansum made history by administering to one of his diabetes patients the first American-made insulin, that he painstakingly produced in his laboratory. By the third day of doses, that dying man, Charles Cowan, tested sugar-free and regained his health with regular insulin injections, living to the age of 90.

Dr. Sansum produced the only insulin in United States at the time, so patients with diabetes streamed into Santa Barbara hoping Dr. Sansum could save them, too. He established Santa Barbara as the center in the United States for groundbreaking advances in diabetes research. Hundreds of thousands of people survived what was once a death sentence because of Dr. Sansum’s tireless pursuit of life-changing breakthroughs for people impacted by diabetes.

In 1944, he founded the non-profit organization known today as Sansum Diabetes Research Institute, to carry on his lifelong crusade in diabetes research, treatment, and care. SDRI is steadfast in carrying on Dr. Sansum’s legacy and continuing his quest. The outlook for people living with diabetes has truly never been brighter.