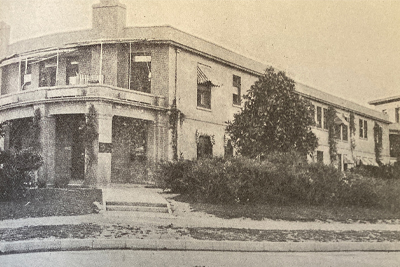 May 31, 1922, marked a monumental day in diabetes history, when Dr. William Sansum became the first U.S. physician to manufacture and administer insulin in the United States. The story begins in 1920 when Charles Cowan, a 53-year-old farmer was battling type 1 diabetes, at the time it was considered a death sentence. Cowan’s doctors had given up hope for him. In a desperate last-ditch effort to save his life, Cowan traveled to Santa Barbara in November 1920.

In September 1920, Dr. Sansum received a letter that would forever change his life. The letter contained a proposal for Dr. Sansum to become the director of the Potter Metabolic Clinic. He accepted the position, and moved his wife and 6-year-old son, Donald, to Santa Barbara. At the exact hour that the Sansum family arrived in Sant Barbara, Cowan was being admitted to the clinic for diabetic acidosis. Little did they both know, history would be made, and millions of lives would be saved.

Dr. Sansum worked tirelessly on developing the hormone made by pancreatic secretions that he found to be missing in those living with type 1 diabetes. In early 1922, his important work was in its most critical stage of research, he was experimenting with manufacturing insulin. By spring, Dr. Sansum and his associates were anxious to make history with their first potent batch of insulin to be administered to a human.

On May 31, 1922, Dr. Sansum was ready to administer the first dose of insulin he manufactured in his laboratory. Cowan was selected as the recipient of Dr. Sansum’s first dose of insulin, and it proved to be successful. The insulin swiftly saved Cowan’s life and made history for all people living with diabetes.

“The third day after I received my first insulin shot,” said Charles Cowan. “Dr. Sansum came racing down the hall to my room, forgetting his professional dignity in the excitement of bringing me a test tube that was blue – meaning I was sugar free! Of course, I didn’t realize it at the time, but I was on the road to a complete recovery. Other diabetics in the wing shrieked with joy, realizing their own sentences of an early death had been reprieved.” (Continuing Quest Dr. William David Sansum’s Crusade against Diabetes by Walker A. Tompkins).

Newspapers around the world swiftly spread the news about the exciting miracle extract, William Randolph Hearst’s newspapers labeled Dr. Sansum, “Santa Barbara’s genius”. People with diabetes began converging on Santa Barbara, hoping that Dr. Sansum could save them, too. The newly discovered insulin was in limited supply and extremely difficult and expensive to create. There was only enough insulin at the time for the most critically ill patients.

Dr. Sansum worked tirelessly to manufacture insulin for his patients and founded Sansum Diabetes Research Institute in 1944 to further his groundbreaking work in diabetes. Dr. Sansum left behind a tremendous legacy, and his enormous contributions to diabetes research and care will have an everlasting impact and paved the way for current and future SDRI researchers to continue their significant, life-saving work. We are forever grateful.